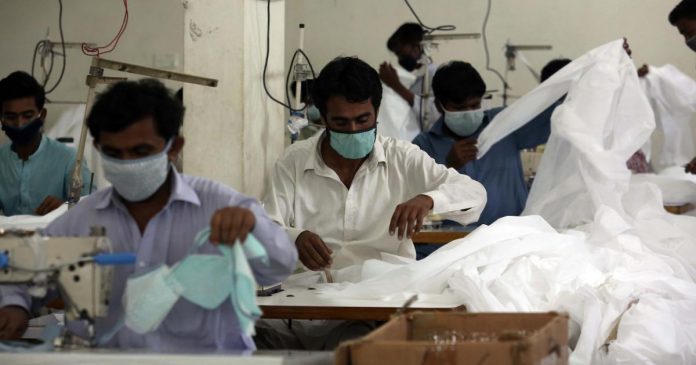 Since the rise of COVID-19, there is a widespread panic among global investors and financial institutions regarding its impact on economies. The global meltdown of financial markets is signaling towards a recession and is affecting industries as well as commodities like oil. According to US Federal Reserve, the U.S. economy might shrink by 30% in second quarter of 2020 as unemployment will go beyond 13%.

Additionally, Asian Development Bank (ADB) in its recent report asserted that COVID-19 could cost losses around $4 trillion to global economies. The economic toll of this pandemic cannot be overstated. After the concerted shock to Chinese economy in first quarter, it has spread to rest of the world and with more severity.

In order to contain human losses, the governments around the globe are putting their economies at standstill under the lockdown with rising expectations of slashed GDPs and declining growths. The stimulus packages announced by governments are also impressive but will have varying effects on economies depending on their financial conditions pre-COVID-19.

Pakistan’s economy is no different than the rest and has been tackling actively with the virus in terms of both health and fiscal measures. So far, like other emerging markets, Pakistan has been facing initial external shocks from global crash of stock markets and outflow of hot money. However, now as the contagion spreads, economists are looking at dire financial conditions ahead of Pakistan and overwhelming figures for GDP, employment rate, exchange rate and exports. Pakistan Stock Exchange has plunged by over 25% since the first case was detected in Pakistan. Similarly, Pakistani rupee which was stabilized recently, has depreciated over 5%. Due to partial lockdown, industries are shutting down their operations and consumers are restricted to their homes.

Initiatives by Government of Pakistan

With Pakistan’s economy hanging by a thread, PM Imran Khan announced a stimulus of Rs.1.2 trillion along with State Bank’s aid of around Rs. 5 billion for healthcare services and separate Provincial Government’s packages.

The State Bank also revised its policy rate by cutting 150 basis points in addition to 75 bps cut during 17th March policy announcement, to provide relief to industries. Imran Khan is also among first leader to call upon IMF for temporary cessation of debt repayments in wake of financial strain on struggling economies during to pandemic.

Impact of COVID-19 on Industries in Pakistan

Due to partial lockdown the industries in Pakistan are facing difficulty in maintaining production and sales units. A large number of companies have shut down due to low demand for products and services. The federal government has allowed several sectors to remain operational during the lockdown. However, low demand for consumer products, automobiles, textile and sports goods as well as disrupted international trade has resulted in halt of industries. This slowdown in industries results in shutting down of industries and layoff of employees which in turn reduces disposable income.

The industries exempted from lockdown include Textile Industries, Sports Goods, Surgical/ Medial Instruments, Auto Parts, Leather and Leather Garments, Fruits and Vegetables, Meat and Meat Products, Construction, Steel and Cement, Pharmaceutical, and Grocery Retail. Moreover, the government has provided several leverages to construction industry and its investors, in terms of taxes and income disclosure to ensure that industry keeps running and daily wage workers get employment.

Despite several measures and contained spread of virus, the partial lockdown across the country along with external shocks has varying implications for Pakistan.

Impact of COVID-19 on Employment Rate in Pakistan

Pakistan is already struggling with unemployment rate of around.1% with more than 1.4 million youth joining work force each year. This percentage of unemployment rate will reach staggering levels during second and third quarter of 2020 as several firms have started major layoffs in the country. Our initial research on the industries revealed that companies are already cutting down on their resources. These actions are taken in view of huge losses estimated for second and third quarter of this year.

Recently, Pakistan Institute of Development Economics (PIDE) in its report revealed that out of 8.51 million migrant workers, around 3.78 million are facing immediate threat. Nearly 45% of migrant labor force in Pakistan works in informal activities of construction, domestic help and factories. This makes them more vulnerable to layoffs. PM Imran Khan’s initiative to open construction industry and export oriented firms is a beacon of hope for these daily wagers as it can tackle the depressing state of hunger and poverty in Pakistan.

The tightened monetary policy under the current leadership had already reduced the GDP growth of Pakistan from 5.8% in 2018 to 3.29% in 2019. The World Bank, ADB and IMF had forecasted the GDP growth of Pakistan for 2020 to remain around 3% in wake of monetary and fiscal policies of federal government. The World Bank has recently revised their growth rate projections for Pakistan to be around 1.1% in wake of impact of pandemic on manufacturing and services sectors. These sectors contribute to more than 58% of economic activity in Pakistan. The rising unemployment is also an important factor which will lower demand for consumer products and thus, less production from industries.

On the other hand, the latest report by ADB brought some positive news for Pakistan as the report appreciates Federal Government’s decisive policy measures in addressing the issues of current account deficit and macroeconomic imbalances. The report also highlights future expectations of lower inflation rates and reduced economic dent in industries due to government’s efforts to keep limited economic activity continued despite COVID-19 risk. ADB has revised its expected GDP growth for Pakistan to 2.6% in light of above factors as well as shrinking current account deficit due to sharp decline in oil imports and their cost.

The yearly remittances from overseas Pakistanis in 2019 amounted to $11.39 billion and the projected remittance value for 2020 was around $24 billion. The federal government introduced several benefits to overseas Pakistanis for selecting State Bank as their main channel for sending remittances like low cost, reliable receipts and more convenient methods. However, with current crisis in place, the global economic downfall has resulted in loss of trillions of dollars to developed countries and unemployment is on sharp rise. Moreover, Middle Eastern countries that contribute significantly to remittances have large scale layoffs with majority of migrant workers belonging to Pakistan.

The remittances in February are already down by 4.4% ($1.82 billion) compared to January, this global pandemic is bound to further worsen the state in coming quarter. Difficulty in banking operations amid partial lockdown will be another factor contributing towards low remittances for 2020. Since remittances constituted around 7.7% of GDP in 2019, any downfall will further put a dent on GDP growth projections.

While all economic indicators are projecting a grim image of Pakistan’s economy in coming quarters, the recent nosedive of oil prices in wake of COVID-19 does indicate a rather weak yet manageable position of Pakistan. The crude oil price declined sharply from $61 per barrel in January 2020 to $20 per barrel in March 2020. The deal to cut down oil output between Saudi Arabia and Russia has failed to finalize as disagreement continues regarding other member countries specifically U.S.

Pakistan unlike other countries has been a beneficiary to this oil debacle as country’s oil imports constitute around 30% of total imports. The import bill for Pakistan has declined by around 20% in March while the current account deficit declined by a whopping 71% to $2.84 billion in current fiscal year (July-Feb) mainly on back of decline in oil prices. The imports in country have already declined significantly due to low demand of products, and restrictions on international trade.

This positive position of external account can significantly offset the impact of lower exports that does not constitute substantial portion of our GDP. Moreover, lowered oil prices can reduce severity of impact of rupee devaluation to some extent.

Experts believe that Pakistan’s benefits from lower oil prices will be distributed unevenly due to shut down of oil reliant industries like cement, power, oil marketing, auto, steel and refineries. However, the recent decision of federal government to push construction industry into action will activate several industries like cement, power, and steel. This will ensure that the economic activity continues and domestic demand can put refineries out of crisis.

Pakistan is facing issue of low remittances and foreign capital outflow in form of hot money as well as fixed income and equity investments. In light of this, we can see further devaluation of Pakistani rupee. The lower import bills will continued to reduce inflation in Pakistan and a single digit inflation rate can be expected by end of 2020 or first quarter 2021. Due to declining import bills and stable current accounts, the money market experts were already expecting a lower inflation rate in the beginning of year.

More: Why we should expect lower inflation and discount rates in 2020?

State Bank has to maintain the real interest rate around 200 basis points. Therefore, we can expect further rate cuts in policy rate bringing it to single digit (around 7%-9%). We can also expect further monetary easing policies by end of FY2020.

PM Imran Khan has called on World Bank and IMF for moratorium on loans of struggling economies like Pakistan. In response to this appeal, IMF and World Bank have requested creditors to stop collecting debts from 76 poor countries including Pakistan.