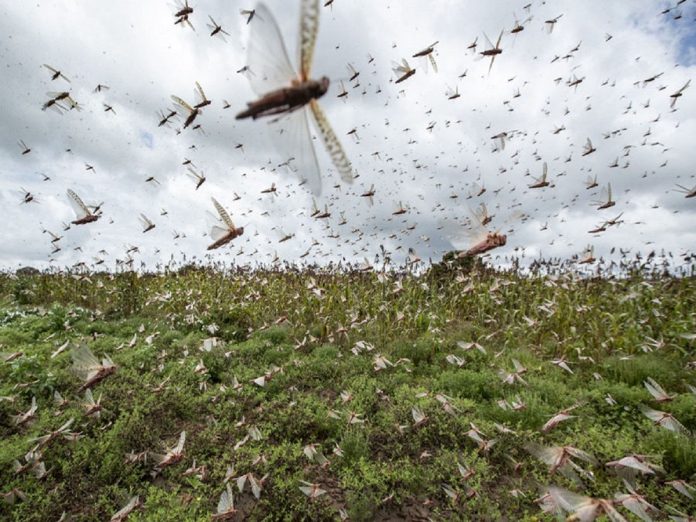 An insect knows no barrier! The locust infestation in 2019 started around same time in Africa, Arabian Peninsula and South Asia, affecting crops and food supply badly. In Pakistan, the locust attack has swarmed eastern side first and later moved to southern region. Last year, the skies over the fields were blocked by dessert locusts which made Federal government approach National Action Plan and approve airborne spraying of over 300,000 liters of insecticides.

However, the locust plague is worst in decades and has not stop till date. In an innovative effort, a bio technologist from PARC conducted a pilot study in Okara with help of local farmers to trap locusts with netting and sell them to animal feed mills for chicken feed. The idea has twofold benefits; giving a monetary incentive to farmers for catching locusts while saving billions in terms of crops and food. Earlier in February’ 20, China offered to deploy 200,000 ducks in Pakistan on basis of the fact that a duck can eat 200 locusts in a day.

The spread of locust that started in 2019 from Arabian Peninsula and reached to South Asia and Africa is among the worst attacks since decades. During Spring of 2019, the locusts emerged from UAE and starting spreading to Iran, Pakistan, India and East Africa. From there on, locust swarms infested Ethiopia, Kenya, Somalia, Saudi Arabia, Yemen, Oman, Egypt and Iran.

India, Pakistan and African countries are worst affected areas by the crisis. In Pakistan, Sindh is the worst hit province from the plague destroying crops worth millions and thus, creating future food supply disruption.

According to Food and Agriculture Organization (FAO), Pakistani farmers will have to face losses of around £2 billion in winter crops and £2.3 billion in summer crops. Similar situation is observed in India. Indian states are now coordinating with Pakistan to implement a unified approach towards ending the plague.

Obviously, one has got to expect another entertaining Indian media story on how Pakistan is behind the locust terrorism in India. After capturing our professional spy pigeons, India has now got another culprit on its hand, the Tiddi-dil.

During February 2020, a bio-technologist and civil servant from Ministry of National Food Security and Research, Muhammad Khurshid, along with Johar Ali from Pakistan Agricultural Research Council (PARC), came up with an idea to tackle locust attack.

The researchers suggested a 3-day trial to set up nets and catch locusts in areas with less impact of insecticides in Okara. Under the slogan, “Catch locust, Earn Money, Save Crops”, the team suggested catching of locusts at night as they are cluster on trees and branches during nighttime.

The locusts were caught to process in animal feed mills, as locusts are high protein bugs that can be eaten by birds including ducks and chickens.

The experiment went extremely successful as farmers who were offered Rs.20 per kg for locusts, made around Rs.20,000 for one day hunting. Currently, hundreds of people are on board with the initiative to earn and save crops.

With over 1.5 billion chicken raised in Pakistan, the demand for locust as feed is unlimited and if applied on large scale, can significantly reduce the spread of plague and devastation of crops and food supply.