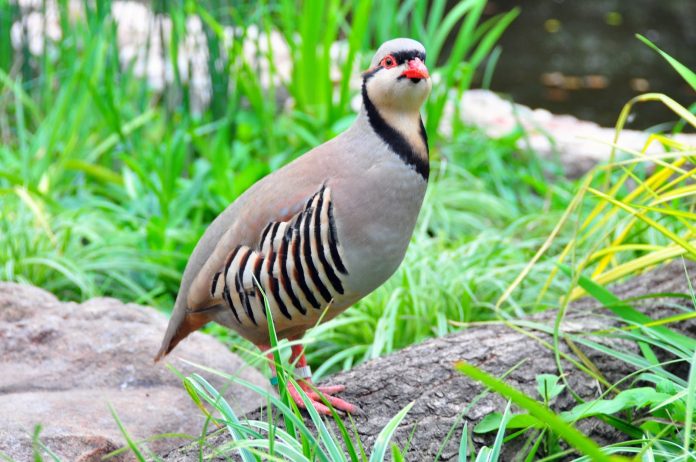 Chukar (or Chakor) is the national bird of Pakistan and Iraq. Originated from Eurasia, Chukar is a considered a super species complex among birds and is called a ‘game bird’ around the globe. The species is now found in western North America, Hawaii and New Zealand as well. Chukar belongs to dry rocky areas, steep terrains, mountainous and desserts areas and is considered a high level hunting animals among other wildlife species.

Chukar (or Chakor) is a round, curvy 13-15 inch long bird with various shades across the body. Chukar usually has a brown-grey body, with black and white strips on wings and a black gorge. Chukar are red-legged which is why they are often confused with red-legged partridges of other breeds however, the buff bellies of Chukar and their distinct calls make them stand out.

Distribution and Habitat of Chukar

Chukars or Chakor usually habitat in high elevation areas with dry climate with rocky hillsides, mountains, terrains, scattered grass or scrubby ground. They are found in areas with elevation between 6000 ft and 13000 ft except for Pakistan where they can be found at elevation of 2000 ft in North Western side of the country. Chukars do not stay in humidity or rainfall and prefer hot weathers. They are never found too far from water. In winters, Chukars are often found in agricultural areas in search of food while in summers they continuously move in plateaus and desserts.

Chukars like most birds are vegetarians and mostly feed on leaves, insects and seeds especially seeds from sunflower, mustard and pinyin pine. Sagebrush is another main component of Chukars’ diet found in North America.

Chukar is considered a very challenging bird in terms of its behavior. Usually Chukars move in groups and when alone, they are mostly running instead of flying. In wild, Chukars fly in groups of 5-40 birds, especially in winters. Chukars are monogamous birds and males are responsible for protection of their children during breeding period.

Chukars have unusual instincts for danger and have distinct voice calls for threat on ground and in air. For hunters, Chukar is one of the most difficult birds to hunt and hence the name Game Bird. Chukars have the ability to take brisk flights and can disappear in bushes within seconds. They are considered hard to hunt without hunting dogs. Bill Tarrant, a wilderness survivalist, in his article, Hunting the Desert Dweller wrote, “Few hunters double on Chukars, and those who triple belong in some hall of fame”.

Based on its exotic and challenging nature, Chukars are bred specifically for hunting in some areas of Pakistan as well despite considered illegal by Pakistani authorities. The months of June and July are considered hunting seasons for Chukars in Pakistan and Afghanistan.

Initially found in Eurasia, Chukars have been exported to North America through South Asia during 1930s and have safely bred there. In western states of America including California, Nevada, Utah and Colorado and British Columbia, Canada, Chukars have been successfully expanding their habitat and distribution across the globe. North American Breeding Bird Survey estimates the population of Chukars around 10 million and defines their species unaffected by hunting. The species of Chukars is therefore, not an endangered species presently.

Picture credits to Wikimedia Commons for the amazing pictures