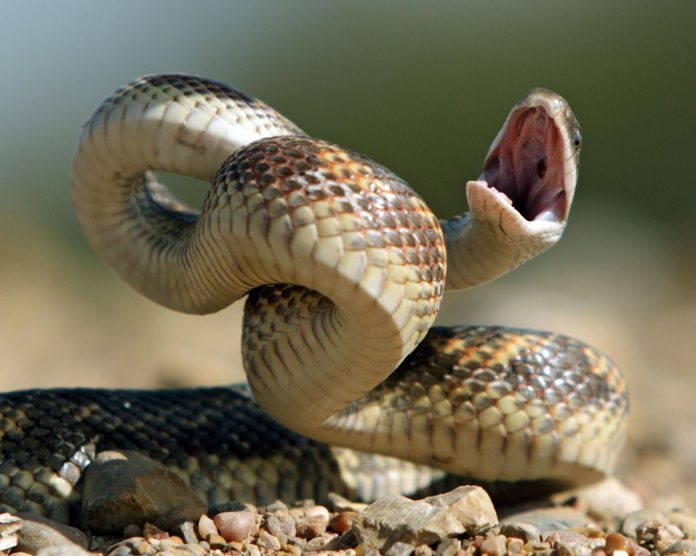 Pakistan is home to large number of exotic species with its diverse landscape of highlands, plateaus, plains, mountains, sea and rivers. Among these exotic species, there are also poisonous species of snakes that create fear factor and loathsome in some while is worshipped by some. Snakes are legless reptiles that have 20 families with 500 genera and 3400 species.

Russell’s viper is one of the most poisonous snakes in Pakistan and is also a leading cause of snakebites in the country. It is mostly found in Sindh and Punjab and extends it extension from Karachi to Khyber. Russell’s viper mostly survives in hilly areas, coastal areas and plains. They tend to avoid moist environments, rainforests, and swamps.

Russell’s viper is around 0.7 to 1.3 meters in length and has huge fangs and short tail. It is found in dark brown, brown-yellow and brown-grey color. It is a nocturnal animal and is usually sluggish during the day. At night, Russell’s viper is more active and feeds on birds, rats and other small rodents. The viper releases venom when it bites and can spray up to 270 mg of venom. A human can die with minimum of 40 mg of dose of venom with symptoms of vomiting, and bleeding gums, kidney failure.

The heat sensing pit helps viper in sensing fresh and warm blood in humans and other animals. Himalayan Pit Viper generally eats small rodents and centipedes. The Venom of this pit is also poisonous and can cause severe pain and swelling in body for 3-4 days. However, deaths with Himalayan Pit are rare as its venom is not as poisonous as Russell’s viper.

Indian Cobra is a common snake in Pakistan and is found in two sub species from North-West Pakistan to Baluchistan. Indian Cobra is also called Sheesh Naag or Kaala Naag in Pakistan and is a long species with length averaging 1.9 meter to 2.4 meters. Cobra is yellow and brown in color and unlike other snakes is diurnal and is seen both at early daytime and late night. It is usually found in both plains, slopes as well as human fields when hunting and only attacks when it senses threat or sudden movements.

Indian Cobra is also captured widely in Pakistan by snake charmers who arrange fights between cobras and mongooses for monetary purposes. Indian cobra is extremely quick in movement and has highly poisonous venom. It bites aggressively and usually several times and can chew its prey as well. The symptoms for Indian Cobra bite starts after few minutes and include disruption of breathing and high pulse rate which eventually leads to coma.

Saw Scales Viper or Lundi is commonly found in Astola Island off Makran coast in Baluchistan. It is a relatively small snake with average length of around 0.4-0.6 meters. Saw Scales Viper has less broad heads and arrow shaped marks on their head. They are olive brown and chestnut color on the outer side and have various colors on inner side including white, greyish-white, yellowish-white, pale-pinkish brown and dark grey.

Saw Scaled Viper is nocturnal is summers and diurnal in winters and buries itself in sand with head outside. It is the most poisonous snake in the world with highly toxic venom yield of up to 250 mg. The saw scaled vipers tend to follow its prey till it bites. It feeds on birds, rodents, frogs and chicken and usually prefers staying away from humans unless triggered. Like Indian Cobra, Saw Scaled Viper’s bite also result in high pulse rate and breathing issues leading to coma.

Indian Krait is nocturnal in nature and has very less tendency to bite. When bites, however, can cause death rate in above 70% of cases. Like other snakes, Indian kraits also feed on rodents, toads, frogs and lizards. The venom of Indian Krait is highly noxious with neuro-toxins that can paralyze the body. Since it usually bites at night, victims can often confuse their bite with insect bites and can paralyze or even die in sleep.