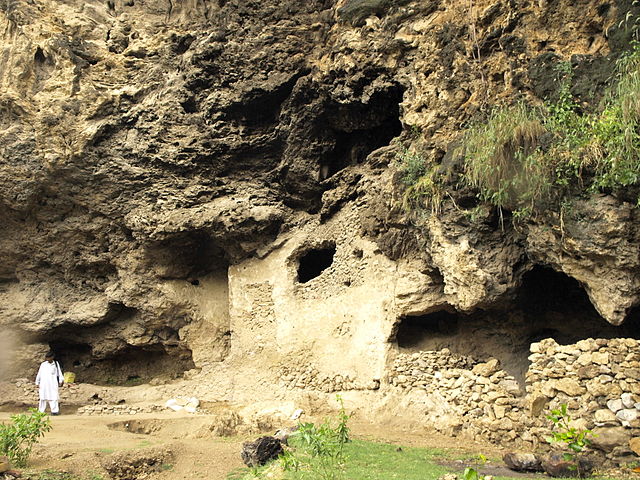 Islamabad is the capital city of Pakistan and is blessed with the enthralling beauty by Nature. Top 10 Must Visit Places in Islamabad have already covered by our site. Today, we are here to take you on a wonderful journey to explore off the beaten paths in the outskirts of Islamabad. These hidden gems add an additional glory to the glistening backdrops of Margalla Hills and lush green environment. Get ready to explore these veiled beauties. Below is List of Top 5 Natural Wonders of Islamabad

Shah Allah Dita Caves that are hidden beneath Margalla Hills are estimated to be 700 years old. Their name is attributed to the village which is named after a Mughal Saint-Shah Allah Ditta. The Village housing these caves holds an important point in history. It served as an important linkage point between the city of Kabul and Taxila (Gandharan center). Alexander the Great and Mughal Emperors such as Sher Shah Suri used it as a passing route while going from Afghanistan to India.

Excavates from caves are considered to be 2400 years old; indicating relations to Buddhist-era.  A water stream runs through the chest of the cave which gets discharged in a pond downside. The calcium which thickened over time with water protrudes outsides from brinks of caves and is considered to be from the Pleistocene period. Caves are rendered spiritual importance by the local community. Centuries-old Banyan trees can be found here with Taveez (Holy writings) and Diyas (firelights) hanging from their twigs.

Drive 27 km North-East of Islamabad to comes across the most captivating water reservoir in the foothills of Margalla range. The hidden place among the woods and mountain is approachable by car and refresh your mountaineering skills by riding a bike along a dirt track towards the Valley. Nilan Bhotu is quite off the beaten due to difficult terrain and poor infrastructure along the way. There is also a Village side with quite less population.

The Valley is famous due to a Saint (Shah Abdul Latif Kazmi) who resided in the place in his meditation hours. The meditation site has been preserved by the bank of the stream. The place is also known as “Chillah Gah” due to this spiritual element. The pond houses many fishes and it is believed by the residents that catching these sacred fishes brings bad luck. The freshwater stream, plenty of greenery, and the iconic hills give make Nilan Bhotu a mystical hotshot.

The outskirts of Islamabad areas chanting and alluring as its inside. Get ready to dive in the glistening beauty nestled (40 km from Islamabad) in lush green surroundings with a picturesque background of Margalla Hills. Neela Sandh Water Fall is precisely situated in the village of Mori Syeda, Tehsil Kotli Sattian, Rawalpindi. Two waterfalls are there whose running water gathers in the form of a deep water reservoir. The reservoir of water is open to swimming but, make sure to take along life jackets to swim safely. Accompany your pals and make sure to visit this enthralling beauty.

Shahdara is named after the Shahdara Village which is present 15 km from Faizabad (Rawalpindi-Islamabad Junction). There are various villages in the adjacent boundaries of Islamabad and this is one of them which is blessed with a running stream of fresh-water. The place attracts visitors from all around Pakistan to visit this wonder of nature.

The village is bordered on all four sides by the mountains which makes this tourist spot a cool and breezy corner. This long stretch is fed by the water running down from mountains in peak summer season (May-July). It seems a real treat and a break from the blazing heat of summers. The stream runs descending down from the side of the road. The roads are packed with food corners which make it a perfect picnic spot.

Pack your gear and get ready to hike the most breathtaking trail of Margalla Hills. Trail 5 starts from Sector F-5 of Islamabad and ends up at Pir Sohawa which offers a panoramic view of the beautiful city. On average, it requires 3.5-4 hours to ace this track. The most scenic of all tracks, it is packed with diverse flora and fauna with several waterfalls and running streams along the way.

So what to expect along the way? You are not allowed to take any eatable covered in plastic or any plastic item along the way. At times, you will find yourself captured in a green tunnel with baboons and monkeys hanging from the trees. Visit it in summer and you will be welcomed with stream and springs overflowing with crystal clear freshwater.

It is the longest track and is not very physically demanding. It covers a total distance of 5.08 km. The track holds a camping site half km along the way. Ficus spring is only 2 km from the start of the track. There are various milestones installed along the way helping to keep a track of path covered.